A Short History of Electric Lighting

Humans have been using different methods to produce light since the discovery of fire millions of years ago. As early humans evolved and civilizations grew, the use of artificial light increased across the world. The availability of light increased safety and productivity for people after the sun had set – spurring innovation and societal development. Eventually, with the discovery of electricity in the 18th century, we were able to bring brighter, safer lighting to buildings and outdoor areas. The progression of electric lighting technology from arc lamps to LEDs is a fascinating story with many international contributors. Follow along through time.

Before the lightbulb, there were arc lamps. The first persistent electric arc was tested by Russian physicist Vasilij Vladimirovič Petrov 1802 and led to the creation of the arc lamp. An arc lamp uses two aligned carbon electrodes that are initially touching and then slowly separated to a specific distance. This produces an arc of very intense light and heat, which eroded the electrodes as the lamp was used. Since the size of the gap between the electrodes is very important to lamp operation, the early arc lamps required consistent manual adjustment. Despite the necessity of frequent adjustments, these lamps were much better than candles; in 1846, the Opera Theatre in Paris became the first public building equipped with electric arc lamps. 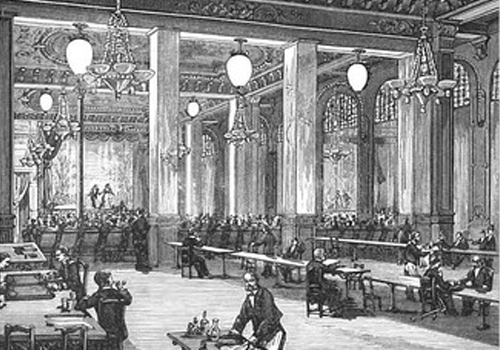 Over time, technology improved and started incorporating electromagnets to automatically regulate the electrode distance. Charles F. Brush designed his own automatically regulated arc lamp in 1877 and became the leading American producer of the lamps. However, there was already a brighter, more efficient design created by Russian telegraph engineer Pawel Jablochkov Nikolayevich in 1876 known as the Jablochkov candle. It was a very simple design with two parallel carbon rods set side by side to maintain a constant arc length with no need for adjustment. The candle was highly competitive with existing lamps because of its simplicity and its efficiency – the Jablochkov candle produced hundreds of foot candles while consuming about 9 amps, whereas other lamps would use double that amount. As a result, it launched the widespread use of arc lamps throughout Europe and in 1881, Godalming, UK was the first city to have an electric street lighting system using arc lamps.

Despite the better technology of the Jablochkov candle, Brush’s arc lamp design became the most common lamp in the US. The first American use of arc lighting was in the Wanamaker department store in Philadelphia in 1878 and by 1881, many major North American cities were equipped with public arc lighting systems. The intense light provided by arc Lamps was great for use in outdoor areas, warehouses, and factories, but too much for small room settings like homes and offices. This necessitated the need for the incandescent bulb: a smaller, more manageable light source that could be used in small rooms.

The technology of incandescent lamps had been experimented with since 1801 but the first viable bulb was not produced until 1879 by Englishman Joseph Wilson Swan. Swan used the Sprengel pump, developed in 1865, to reduce the pressure in the chamber to one millionth of an atmosphere and eliminate almost all of the oxygen responsible for filament failure in previous models. This allowed the filament to last longer and extend the useful life of incandescent bulbs. The Savoy Theatre in London featured 1,194 of Swan’s lamps and became the first public building with incandescent lighting in 1881.

Across the Atlantic in America, Thomas Edison was experimenting with thousands of different filaments, eventually landing on a carbonized bamboo fiber that lasted around 1,200 hours in 1880. 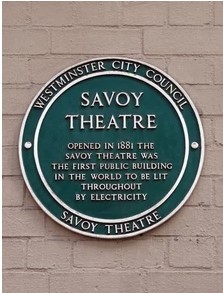 This bulb was compared to three others at the 1881 International Exhibition of Electricity in Paris and Edison’s bulb proved to be superior for commercial use. It was more efficient, featured high resistance, and operated at a low current, allowing multiple lamps to be wired in parallel.

Thomas Edison was by no means the only person to experiment with incandescent bulbs nor was his bulb the most advanced, yet he is often considered the inventor of the common light bulb. While that title may be incorrect, he is largely responsible for the widespread use of incandescent bulbs due to his practical design and efforts to distribute electricity to end users from one centralized power generation station. This allowed individuals to purchase just the incandescent lamps and the electricity to power them, rather than pay for the construction of a whole generating plant onsite. It made electricity more accessible to the average person and led to the construction of centralized power grids all over the world – an electric grid structure we still use today.

With the expiration of Edison’s basic lamp patent in 1893, many new competitors entered the market and resulted in a significant decline in prices. It also helped spur innovation and the development of new lighting technologies.

Gas discharge lamps became more widely used in the early 20th century, but the technology is much older. The original gas discharge tube was invented by Heinrich Geissler in 1857 and is often used as a blueprint for other types of discharge lamps. For example, neon lamps invented by French chemist George Claude in 1909 derived from the Geissler tube. These were introduced in the US in 1923 and became extremely popular for storefront signage and advertising. We still see neon signage today, though these lights are most likely faux-neon lights using LED technology to give the appearance of neon lights.

Fluorescent tube lights commonly used in office and retail settings also borrowed from Geissler’s technology. The design was patented in 1926 by Edmund Germer in Germany and has a powder coating on the inside of the glass that acts as a frequency converter, producing a more pleasant light for indoor applications. The electronics manufacturer GE acquired the rights to the fluorescent tube in 1939 and reached large-scale commercial production after World War II. These lights have become a staple in commercial buildings and can be found in almost any lighting supply store. Compact fluorescent lights (CFLs) were introduced by Philips, another electronics manufacturer, in 1980 and quickly established themselves as a better alternative to incandescent light bulbs for residential use.

In the outdoor lighting realm, different technologies prevail. In 1927, the high-pressure mercury vapor lamp was developed by Hungarian physicist and engineer Dénes Gabor. It was used as street lighting throughout the thirties but was superseded by the low-pressure sodium vapor lamp shortly after. Sodium vapor dominated the street lighting market because of its unparalleled efficiency of 200 lumens per watt – twenty times higher than incandescent lights and almost five times higher than high-pressure mercury vapor lights. However, their distinct yellow light made them only suitable for outdoor use. By the end of the 1930s, rural areas of Europe and North America were electrified and featured sodium vapor lamps along their streets.

Then in the 1960s, advancements in incandescent technology led to halogen lamps. Halogen lamps use any halogen (iodine, bromine, chlorine, and fluorine) to prevent the evaporation of a filament inside a light bulb. Metal halide lamps combine a halogen with a metal to create bright light that looks more white than other combinations of gases. The better color rendering resulted in the greater use of metal halide fixtures in parking lots and streetlights and they are the most common outdoor lighting technology seen today.

Like other lighting technologies, LEDs were developed by multiple researchers. The initial principle was discovered by Henry J. Round in 1907 when he observed the electroluminescence of a silicon-carbide junction. However, the first commercially viable LED was created by GE researcher Nick Holonyak in 1962. This LED emitted visible red light but was extremely expensive for mass production. As new processing and packaging techniques emerged in the 1970s, costs of producing LEDs dramatically dropped and the yellow LED was developed in 1972 by M. George Craford, who also happened to be Holonyak’s former coworker.

Despite the impressive breakthroughs in LED technology, red and yellow light are only beneficial in limited applications. The ultimate goal was to get white light that could be used for a greater variety of purposes. After decades of research, Japanese researchers Isamu Akasaki, Hiroshi Amano, and Shuji Nakamura developed the high-brightness blue LED in 1989. This opened the door to the production of white light LEDs and the three researchers shared the 2014 Nobel Prize in physics for this discovery. 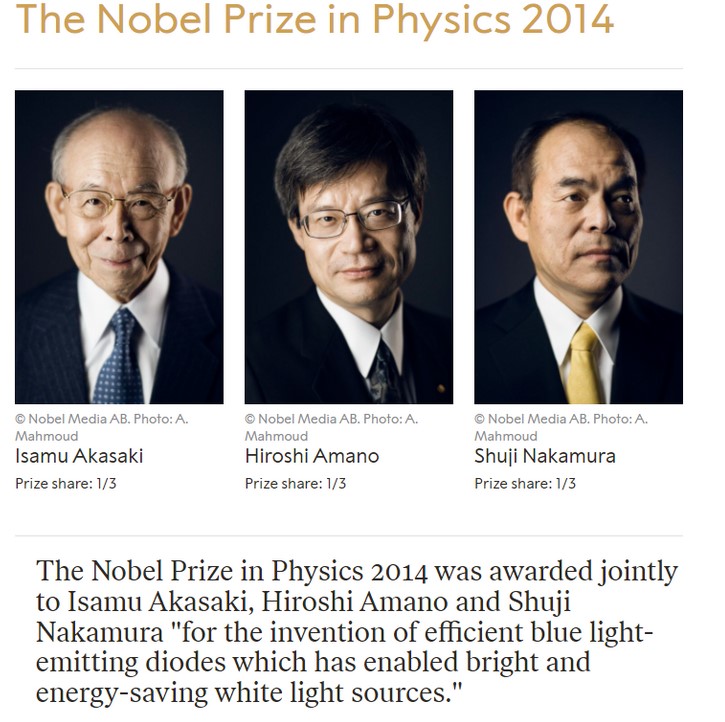 LEDs are the preferred lighting technology for most modern applications because of their efficiency, versatility, and long operational life. They’re used in a multitude of products that we use on a daily basis – indoor and outdoor lighting, cell phones, vehicles, billboards, roadway signage, TVs, and computers immediately come to mind. In fact, the LED retrofit business exists solely to replace older lighting technologies with LED because they are a much better option. Many utilities even offer financial rebates to incentivize a switch to LED. (If you have older lighting that you would like to replace with LED, Colite Technologies can help you with that.) Furthermore, with the use of lighting control technologies like daylight sensors, motion sensors, dimmers, and connected controls, LED lighting can be optimized to each application. This flexibility saves energy and reduces maintenance needs over time, which is good for both your wallet and the environment.

This very concise summary of the history of electric lighting only captures the highlights over time. There were many more contributors to the advancement of electric lighting and a lot of technologies have found niche purposes not mentioned here. Interestingly, the incandescent lamp and other similar lamps were the leading lighting choice for hundreds of years until the development of LED. Nevertheless, it is evident that lighting improvements help us live and work in safer, more comfortable environments. With continued research, we’ll no doubt see lights become even more efficient and less costly, bringing quality lighting to all parts of the world.