For Colite, 2016 represented a terrific year of growth. Our business is booming and our processes are continuously improving. Entering 2017, it was important that we kept our momentum and worked hard to lead by example. That philosophy is ingrained in everything we do at Colite; from the products and services we offer to the people and culture that stand behind it. This ethos can also be found in the technology we use.

As we expand our offerings around signage programs, we’re working to develop better solutions that address our clients’ needs in a rapidly-changing environment. Among these new technologies, LED lighting offers a tremendous return on investment and serves our commercial and industrial customer base in a number of ways. Simply stated, today’s LED technology just makes sense.

To focus on the process and demonstrate the effectiveness of LED lighting, we set out to retrofit our entire manufacturing facility by replacing nearly 300 traditional bulbs with the latest in LED technology.

We replaced each of the 400-watt metal halide bulbs (disconnecting their ballasts and rewiring) with a variety of self-contained LED fixtures in 80, 100, and 120-watt configurations.

Our initial test results and the data we gather over the coming months will reflect the technology’s benefits in several key areas: savings, performance, safety, and environmental impact. 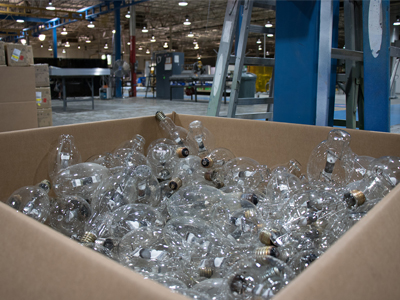 Generally, the first question to arise about any new product implementation is, “How much will I save?” We’ll address this question by analyzing the savings in several ways: actual material savings, energy consumption savings, and opportunity savings. 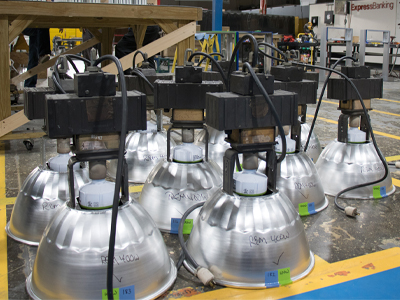 To properly assess energy consumption and efficiency between different bulb technologies, it’s important to understand wattage. In short, wattage refers to the amount of energy required for a bulb to output a given amount of light.

Each of our old metal halide bulbs required 400 watts. By comparison, our new LED bulbs require 80, 100, or 120 watts. Even with the largest and brightest LED bulb at 120 watts, that’s still a net energy savings of 70% per fixture.
Given those energy savings alone, it quickly becomes apparent why LED is leading the way.

On average, each of the 400-watt metal halide bulbs we replaced cost roughly $10 new. However, these traditional bulbs also require a separate ballast to regulate current and provide sufficient voltage.

Depending upon the output, warranty, and number of bulbs each ballast can support, a single unit can cost between $40 to $150. By comparison, the ballast-free 80, 100, and 120-watt LED bulbs we installed were $65, $75, and $85 respectively. We were also able to reuse the original fixtures. Of course, a true savings analysis could not simply end there. 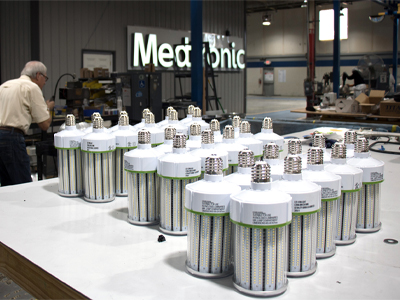 With a company like ours, there’s a cost associated with every undertaking that’s not a part of our core job function – and repeatedly changing light bulbs falls directly into that category. When we talk about opportunity savings, we’re talking about reducing the amount of time and resources wasted on maintenance.

Metal halide bulbs generally last about 15,000 hours – and when a bulb fails, we have to secure a scissor lift, pay maintenance crews, and turn our attention to something other than delivering great signage programs. By comparison, our LED bulbs have an average expected lifespan of 50,000 hours. Given those numbers, it’s easy to see why facilities are making the switch. 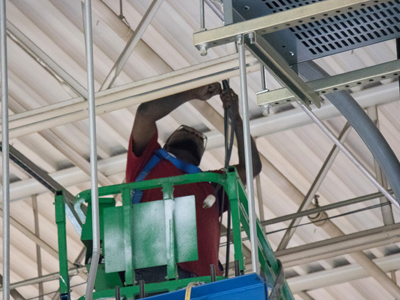 Another major opportunity that is often overlooked comes in the form of business that is either gained or lost due in part to an organization’s green activities. Let’s face it, the environment is important. In fact, it’s our future; so why not take care of our planet? It’s important to consumers and it’s becoming increasingly important to our customers, business partners, families and friends.

Today, many large companies look to work with partners that can demonstrate an ability to minimize their impact on the planet and reduce their carbon footprint. For Colite, retrofitting our operation to include the latest in LED lighting is a huge step in that direction.

When we talk about light performance, we’re primarily looking at intensity, projection, and color. Unfortunately, the outdated metal halide bulbs simply don’t compare to LED. As you can see from the picture below, metal halide bulbs (left) offer an orange-colored light that appears dimmer and thus does not do a great job of rendering color accurately. With LED (right), we see that bulbs offer better projection with even dispersion and a whiter light that more accurately reflects color. As signage designers and manufacturers, you can imagine how important the improved color accuracy of LED is to our final product.

A side by side comparison: Old Metal Halide (left) vs New LEDs (right)

Another very telling comparative statistic that we discovered relates to how the bulb technologies compare as far as light projection. We measured each light’s projection by foot-candle at varying distances from the source. This measurement helps us determine how effectively light is reaching a given area. For example, a bulb can generate a tremendous amount of illumination at the source yet have just a small amount of that light reach its intended area – in our case that would be the factory floor. In these tests, a lower foot-candle reading represents poor projection.

Light output readings from our old metal halide bulbs and their LED replacements.

One of the benefits of better light projection is an enhanced level of safety. When you’re operating a major manufacturing facility like ours, it’s important to keep the operation illuminated completely and reliably. This means providing clean light in all areas of our plant, without suffering from the frequent dark spots resulting from burned out bulbs. LED also emits less UV radiation than any other type of bulb.

When the net benefits of LED lighting are tallied, it becomes abundantly clear just how significantly outdated bulbs and lighting technology are impacting our planet. LED bulbs use exponentially less energy than their traditional counterparts, reducing greenhouse gasses. They also require far fewer replacements than traditional bulbs, thereby reducing waste. Today’s LED technology also emits less heat, reducing the need for increased cooling and further energy use. And unlike some traditional bulbs, LED does not contain deadly and hazardous mercury.

While we still have a significant amount of energy data to collect, analyze and share – one thing is certain. Today’s LED technology makes sense.

Our metal halide bulbs were drawing roughly 400 watts of energy to generate 15 foot-candles of illumination at floor level. LED on the other hand, is delivering more than twice that illumination with one-third the energy consumption. In short, we’re getting a higher-quality light with better dispersion, more efficiently, with less maintenance and a far greater lifespan.