A Brief History of the Wind Turbine

Since early recorded history, humans have utilized wind energy to increase agricultural efficiency and propel commercial endeavors across the seas. Beginning in Persia and eventually making their way around the world, wind harnessing techniques have helped civilizations establish productive solutions to everyday tasks. While the use of wind power has ebbed and flowed throughout history, the last century and a half has shown great progress in widespread adoption. Fortunately, with advancements in materials, efficiency, and incentives, the future looks positive for wind energy technologies.

The terms “wind energy” and “wind power” both describe the process by which wind is used to generate mechanical power or electricity. This mechanical power can be used for specific tasks—often for agriculture—or be converted into electricity by a turbine.

Pictured above are the Nashtifan windmills, locally known as “Asbads,” located in northeastern Iran. These windmills were used to mill grain and protect the village from strong winds during the 120-day winds, which annually sweep through the east and southeast of the Iranian Plateau from late May to late September. These thousand-year-old windmills are considered to be the first prototype of wind turbines and their vertical axis structure has influenced other turbine designs in different regions of the world.

How do you get electricity from wind?

A wind turbine converts wind energy into electricity using the aerodynamic force from the rotor blades, which work like an airplane wing or helicopter rotor blade. When wind flows across the blade, the air pressure on one side of the blade decreases. The difference in air pressure across the two sides of the blade creates both lift and drag. The force of the lift is stronger than the drag, causing the rotor to spin. The rotor is connected to a generator, either directly or through a shaft and a series of gears, which then produces electricity. 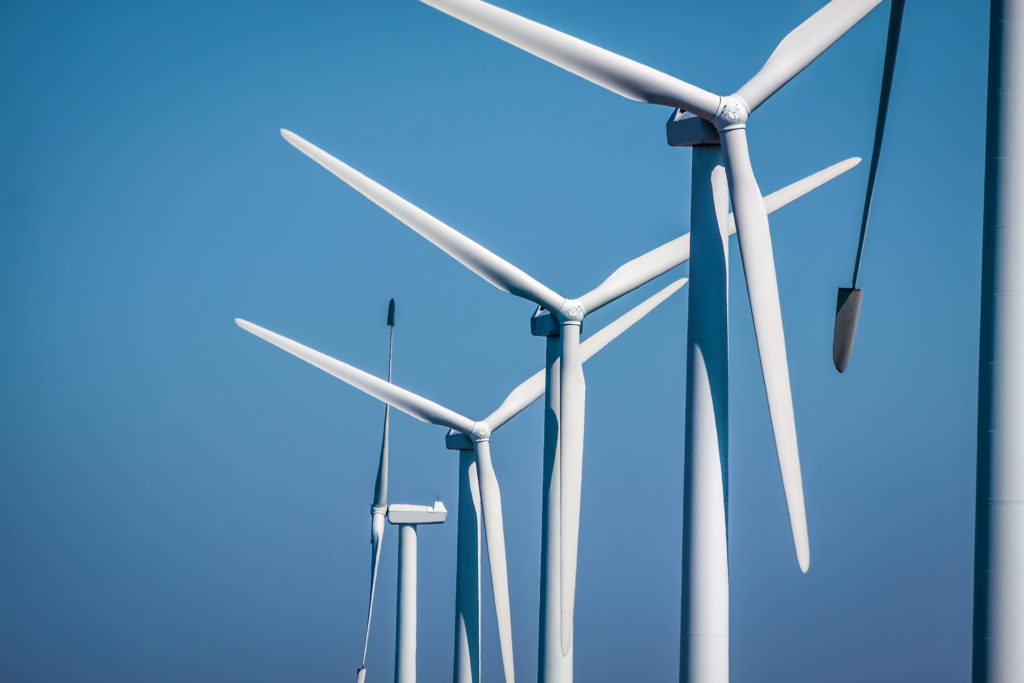 When most people imagine a wind turbine, they think of the horizontal axis wind turbine (HAWT) as pictured on the left. These are the most common types of wind turbines and help produce significant amounts of clean electricity. However, there are unique benefits to the vertical axis wind turbine (VAWT), pictured on the right, that HAWTs do not have. Due to the elimination of pitch and yaw components on the turbine, it can harness wind from any direction and is highly efficient. They are quieter than the traditional HAWT and have lower cut in speed—less than 6 mph versus an average of 6 to 9 mph for HAWTs—meaning they start generating electricity at lower wind speeds. Even so, both types of turbines are advantageous in different settings and should be evaluated by application.

Now, you may be asking yourself, isn’t wind energy expensive?

After the oil shortages in the 1970s, the United States federal government began to support policies and incentives for alternative energy use, helping to expand research into large-scale wind and other renewable energy projects. Greater awareness of wind energy potential has encouraged further advancements in turbine technology and the average price of wind has gone down 69% over the last decade. More affordable and accessible systems benefit users with clean, abundant energy that is less vulnerable to outside influences, which in turn increases energy security and reliability. Dependable electricity promotes the growth and well-being of local economies—eliminating inefficiencies caused by disrupted power and supporting the livelihoods of individuals in the community.

Today, due to the ever-rising cost of energy and the public’s active engagement in environmental sustainability, utilities, corporations, and people alike are seeking cleaner and more eco-friendly sources for generating electricity. This strong demand is driving a growing industry that finds itself expanding across the heartland of the United States and into everyday life. The US surpassed 96 gigawatts of installed wind energy capacity in 2018—enough energy to power 28 million homes—and is on track to continue increasing that number in the future. As we phase out coal, wind energy’s cost competitiveness will help diversify America’s energy mix and provide a sustainable source of electricity for generations.